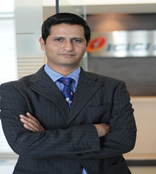 Pankaj Pandey heads the Retail Research at ICICI Securities. He has an experience of over 18 years in the capital markets and has been associated with the company for more than 15 years.  He holds a post graduate degree in management and is also a CFA (ICFAI). Under his leadership, the ICICI direct fundamental research team tracks over ~300 companies across sectors in the large/midcap/small cap & microcap universe. He also heads the technical, derivatives and MF research desk, thereby covering the entire gamut of equities based research offerings.

Q. What is your market outlook for 2020? How volatile the market is going to be? Which sector should be a focus point for 2020?

A. We call the current market setup as “a period of dissonance” with the economy and equity performance reflecting clear disunion. The GDP clearly has witnessed a slowdown in growth while the Nifty is at the all-time highs. Even within equities, polarisation is clearly visible with select large caps ruling the roost with the broader market witnessing a dry spell.

However, as we embark on 2020, the domestic setup is poised interestingly as investors await a recovery in key macroeconomic data viz. GDP and infrastructure spending post a weak year. Corporate earnings post a lull will be keenly watched for recovery led by BFSI space. We expect Nifty earnings to stage a smart recovery, growing at a CAGR of 18% over FY19-21E. Outperformance in forward earnings (FY19-21E) is expected to be driven by the BFSI space amid stable asset quality and recovery of large stressed accounts.

While the interim volatility cannot be ruled out in case of global new flows, we remain structurally positive on Indian equities with dual triggers of expected earnings recovery on low base as well as low-interest rate regime. We continue to like sectors such as Banks, domestic Pharma & Healthcare, Consumption, Capital Goods, and Commercial Real Estate, etc.

Q. Metal sector seems to be in an upward trend, what is your view on this uptick and where do you see this sector heading?

A. The recent optimism in metal sector has been driven by the Phase 1 deal signed by the US and China. While both world super powers have stitched a Phase -1 deal, going forward, the focus is likely to shift to negotiations with respect to further phases. Hence in the intermediary, trade negotiation, related news flow will continue to impact the commodities market. On the domestic front, prominent large Indian companies have the advantage of being one of the lowest cost producers of steel, aluminum, etc. globally. While a lean cost structure works in their favor, the selling prices are dependent on global commodity prices whose trajectory depends on developments in China.

Going forward, with a focus on infrastructure spending, while domestic players have a pedal of decent volume growth, with respect to pricing, the domestic players are likely to be dependent on Chinese developments. Hence, in the midst of a current situation of trade negotiations, uncertainty with respect to pricing environment, in an event of any positive news flow, metal counters can be looked more on the perspective of momentum plays rather than structural buys.

Q. Mid-caps and Small caps has seen poor performance in 2019. Will these funds continue to outperform in the current market as well?

While midcaps outperformed large caps significantly in FY15-18, it witnessed a reversal in trend amid liquidity issues along with NBFC crisis and other corporate defaults over the past 18 months. In turn, this skewed investor’s focus towards quality companies, leading to underperformance of the broader markets, in general. Quality companies in both large-cap and midcap/small cap have done well in 2019. We expect this trend to continue even in 2020.

We believe that a stock specific approach in both large caps and midcaps will continue to do well. However, midcap and small cap funds offer a better investment proposition as a stock-specific approach may do well in the broader markets. Hence, lumpsum investment in midcap/small cap funds at current levels may be considered. However, the core portfolio should always comprise multicap oriented funds with accumulation being done through a SIP approach.

Q. We were in a slow economy where GDP was slowing down, industrial outputs reduced, poor consumer sentiments, unemployment rates were high and we assumed we were hitting the recessional phase? Do you see such thing in the coming months? If so, what should we be watchful of?

A. Indian nominal GDP growth has slowed down to 7% YoY in H1FY20 on the back of slower growth in investments (GFCF-up 4% YoY) while consumption continues to grow at steady pace (Private Consumption-up 7% YoY in H1FY20). The slowdown is largely due to:- i) moderation in capital outlay of all states (up only 7% YoY in FY20) following slower-than-expected GST collection and ii) change in guidelines of land acquisition towards road projects.

On the positive side, the improvement in land acquisition progress in road sector indicate that tendering activity set to pick up in H2 FY20. Also, RBI survey of 1539 listed manufacturing companies shows there are signs of investment cycle picking up. The manufacturing firms have increased investments in fixed assets to 45.6% of the funds available in H1FY20 v/s 18.9% last year. Beside this, the government’s recent announcement to curtail corporate tax rate for new investment along with benign inflation and lower interest rate scenario could pave the way for a recovery in private investment in FY21E. Hence, we expect full-fledged revival in the economy (including investment) in FY21E.

Q. The year 2019 had a few IPOs launched in the market and of them a few underperformed even after getting fully subscribed. Would you like to share your opinion as to why and should we look out for a few future IPOs?

A. There is an ample opportunities for new IPOs as many of new businesses in niche segments remain in unlisted pace and listing of the same would allow investors with more choices. IPO, therefore, allows the investors to participate in such new business growth. Moreover, we have already seen how capital efficient segments such as AMC, insurance etc. have clearly allowed investors to participate in their growth stories. We continue to remain bullish selectively on capital efficient businesses getting listed on bourses.

Q. What’s your view on ETFs in the current market? Do you think ETFs are growing better than Mutual Funds?

A. ETFs have already taken over the world, with asset under management in such funds already surpassing that in traditional mutual funds in many countries.  In India, the ETF landscape gained traction since 2015 and has not only become much bigger but also more diverse. Assets under Management for ETFs has grown from ~| 5400 crore in December 2014 to around ~|1.6 lakh crore as of December 2019, growing at almost 100% in last 5 years.

However, this growth in ETF is driven by institutional flows led by EPFO in Nifty 50 and BSE Sensex ETF along with CPSE ETFs. Individual investors still prefer active funds as historically active funds have outperformed benchmark indices over a longer period of time in India. The trend, however, is shifting albeit with a slower pace with retail investors also considering ETFs as an allocation in their overall portfolio

Q. Gold prices have been shooting up since last year. Do you think there is any chance for its value to come down? Personally, how do you feel about investments in gold commodity?

A. Gold prices witnessed one of the best year in terms of performance getting a lift from Federal Reserve rate cuts and geopolitical tensions with global prices up by around 18% and domestic prices rallied by 24% during the calendar year 2019. Market expect that low interest rate is likely to remain for long and there is very little expectation of any hike in the near term. Low rates help the precious metal several ways. It lowers the opportunity cost, which is the lost interest income from holding a hard asset rather than interest-bearing investments. Lower rates also hurt the U.S. dollar, which is good for gold due to the historical inverse relationship between the two. Uncertainty surrounding BREXIT deal and significant amount of global sovereign bonds trading with negative yield also helped sentiments towards Gold.

The historical negative co-relation of Gold prices with other asset classes do not seem to be in sync in near term. The year 2019 saw all the three major asset classes viz. global equity market, debt market as well as Gold delivering double digit returns. One of the likely reason could be that even gold has become a financial asset which gets premium in an environment of surplus global liquidity.

Historically, the performance of gold is not structural. Generally, it performs in specific short periods of time, especially during capital market meltdown, global recession, geopolitical tension, etc. Therefore, investors should not expect stable returns from Gold as should only allocation a small portion to provide stability in investment portfolio.

How can I add my SBI account to my icicidirect trading account?
by - SRINIVASA RAO BHAVARAJU
I have just sold a share through eATM. Why is 1% transaction withheld by ICICI Direct?
by - AJAY AURORA